I'm back! I had an awesome time with my family at the fireworks and with my friend in Toronto. The U-2 concert rocked!

I wanted to get on the scale this morning. I'm addicted to getting on the scale. I've made a promise to myself to only get on the scale on the 1st of the month. The time in between I do my best to keep my focus on the things that matter - my choices - NOT the number on the scale. But I REALLY want to look NOW! I need some approval or punishment - I'm not sure which and I'm sure Mr Scale will give me one or the other!

Family picnic, burgers, tasty side dishes - things not on the meal plan. I stuck with the burger and some strawberries. I did good. Then it was the fireworks.... where my granddaughters and I were captivated by the elephant ears! We bought two and split them between 4 of us. No toppings, just the sugar and cinnamon. Not the best choice, but we didn't splurge for some of those toppings!

Sunday was the drive to Toronto. I had a protein bar for breakfast in the car, along with some sweet cherries to munch. Lunch was a bowl of French onion soup. I didn't feel like another burger or sandwich. At our stop for gas, I circled the gas station twice to raise my step count. I went inside. I looked for bananas, they didn't have any. On to Toronto... Dinner was atop the CNN tower in the revolving restaurant. 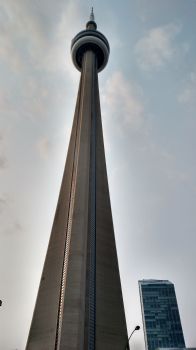 I had the prime rib with summer vegetables. I also nibbled on a piece of bread from the bread basket... ok... actually TWO pieces of bread. It was massive. I ate it ALL - except the cooked carrots which I don't like. 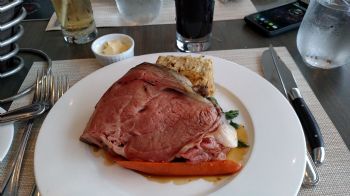 Yep, that dinner blew the calorie count for the day. Then there was the desert.... the molten chocolate lava cake with chocolate ice cream and chocolate fudge sauce. Ahhhh - but there WAS a small slice of strawberry and a spring of mint on top of it! The only healthy thing on the plate! Notice, there is no photo of the desert! The desert alone probably took me over my day's calorie count... I don't even know how to track that thing! I gave up trying!

At first I thought it was a little hokey and touristy, but the food was really good, the waiter was great, the view was great and we really enjoyed the experience. Not to mention chatting with the people at the tables around us - a couple celebrating 51 years of being married, and a couple of ladies vacationing from a small town in England. 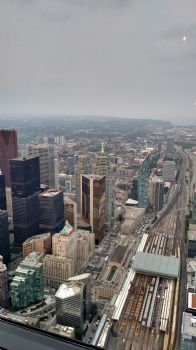 The next day I got up early and went for a morning walk. We then hopped the train to the city and walked around checking out the sites. We wandered most of the day. Lunch was in a beautiful city park. We found a little place that had wood fired pizza's, got the individual sized ones and took them to the park. We could have split one. They were quite large. We both stuffed ourselves and had one slice left over! Then it was back to the hotel to get ready for the U2 concert. Being stuffed from a mid day lunch, we decided to skip supper before the show and maybe grab something there. I even found the time to get in 20 minutes on the hotel treadmill (which sucked - but worked). I managed about 17000 steps this day.

We got a bottle of water and settled in our seats. U2 put on a great show. Neither of us were hungry and we didn't want to leave our seats to get something to eat. We just soaked up the talent of the boy band from Ireland... 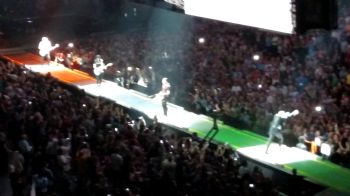 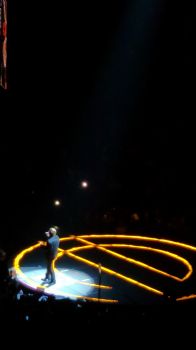 Tuesday we got up, ate the hotel breakfast and headed home. Lunch was a half sandwich and soup from Panera Bread in the late afternoon.

It was good to be home and back to my routine and comfort zone - however, I was beat. I planned on walking the dog when I got home, but instead, dog and I ended up napping on the couch. My step count was a dismal 3,000+! I felt defeated. I didn't meet my step goal AND I made some crappy food choices this weekend! I went to bed feeling disappointed. I let myself down again.

First thing this morning, all I wanted to do was hop on the scale. I wanted to see what it said. I wanted to know what kind of damage I did. I wanted some sort of approval.... or maybe I was looking for punishment for my poor food choices.

After I got out of the shower, I briefly thought about going down to the bathroom in the basement (where I now keep Mr Scale) and visiting him. I looked in the mirror and reflected on the good time I had this weekend. I thought to myself, why put a damper on that feeling? I can't change any of the things I did. I don't know that I would even want to. I ate some of my favorite foods that I normally don't eat. That isn't bad. It's ok. As long as I don't do it every day. I even did what I could to get some extra steps in, well except for Tuesday. Hah - but Tuesday, I did circle the gas station on my way home AND they did have bananas. The had a TON of bananas. I didn't want to buy one to eat - but I had to smile and take a picture of the bananas! Healthy choices DO exist! 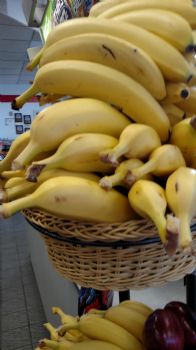 You see, Mr Scale's take on the weekend and the number he would flash really isn't important. What is important to me in my journey is what I do today. The choices I make today. Will I make choices to take me towards my goal or move me further away.

So, I ate my egg for breakfast, had my fruit snack at the office mid morning, walked on my lunch hour and had my turkey sandwich for lunch. All is well. Heading towards my goal... no shame, no guilt, just good memories of some good times!

Dang! This is growth for this girl. No "I can't", no "this doesn't work", no "this is too hard", no "I can't eat the foods I love ever again without being punished". I must admit - I really want to know what Mr Scale has to say.... but it will wait. Absence makes the heart grow fonder Barb!

I'm beginning to LIKE this journey. I am going places! 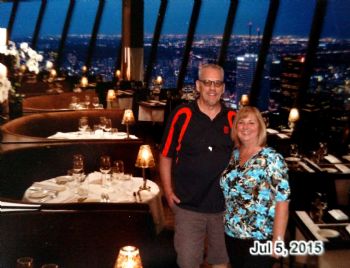