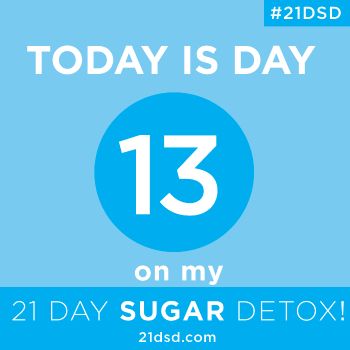 So I had mentioned wanting to make this sugar plan more of a long term thing. Well I haven't changed my mind, but it is best for me to tackle this 21 day challenge and then work on the rest. If I get overwhelmed, I shut down, so baby steps for me is right.

For full disclosure, I have had 2 diet cokes, and I have chosen to keep my whole wheat, high fiber tortillas in my diet (not daily, but sometimes). It also limits you to 1/2 cup of rice a day and I guarantee I've had 1 cup on several occasions. I am not trying to be perfect but I am trying to stick to the fundamentals, even if I am not following it perfectly.

For the long haul I think I will make some changes so that it isn't so strict. I don't want to feel bad about the occasional diet coke, when I would have had probably 13 diet cokes in 13 days! I already added in my tortilla, and if I want whole wheat versions of carbs once in a while I am not going to feel bad about it. I do not mind leaving out the fluffy white carbs, but I also can't say I will never have a jalapeno kaiser roll ever again. I love those and they are white fluffy carbs. I don't want to feel like I've failed or screwed up because I have the occasional thing.

I would also say if you told me I could never have a Cheeto again, I would lose my mind. Yes, I love them too much. I do not want to go back to having them several times a week, but I would like to have them occasionally. I have not decided how I'm going to tweak this after the 21 days. I am torn between doing 21 day cycles, with a week off in between, but I am afraid that I will go crazy for that week. Now that I say it out loud, I definitely can't do that, I will go crazy! If I ever feel like I need to reign it in I will just randomly start a more strict 21 day cycle. But I think I want 1 meal a week where I can have something that I wouldn't normally have. Not a huge blow out binge meal, but if I wanted cheetos, then 1 serving of cheetos with dinner. If I wanted a kaiser roll have that.

I do intend to stay away from the sweets for sure. Does that mean I might have a piece of cake or a donut at some point? I am certain I will, but it is never something I want to have daily or even weekly. It's just better for me that I don't.

I am down 7 pounds in 13 days. I did not take measurements before starting this but I have measurements from January and I weighed the same I weighed today, and amazingly enough I have lost 1 1/2 inches off my waist, and 1 inch off my neck. I was amazed because I am the same weight as I was previously, so I am very happy with that.

Biggest Loser: I lost 2 pounds for round two, that is because I spent so much time messing around and gaining and had to lose that all again. The girl that is winning the whole thing lost 5, she's amazing and has lost 20 in 6 weeks! She will win the big prize no matter how hard I fight, and she deserves it. I am not even trying to beat her. I am only in competition with myself and if I can lose 4-5 over the next 3 weeks I will be ecstatic. I've lost 12 so far and so if I can do a few more I'm happy. My goal for the challenge was to lose 10 pounds, so I've already beaten that!

I also have finally got back my restful sleep thanks to the sugar detox. I fall asleep fast and stay asleep. That is what I was really after. The weight loss and inches are just the icing on the cake!

So to sum up, I won't be the biggest loser, but probably 2nd place out of 7, I've lost inches, I'm sleeping well, I'm feeling good and I'm happy. I can't ask for more!