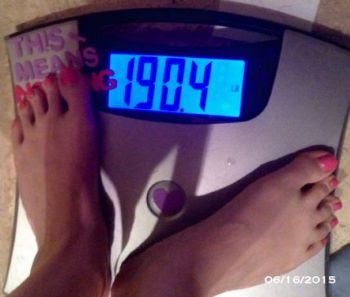 I know it's probably 4 pounds water weight and 1 pound real weight (based on my calorie intake), especially because I was eating SO poorly the 10 days leading up to starting the detox... but at the end of the day it's refreshing to see the scale move, and water or not, it's 5 pounds I'm currently not lugging around!

One thing I have truly struggled with was deciding my goal weight. Some people know it instantly, and they have that number in their mind and they are going until they see that magical number. For me it wasn't so easy. I was never a normal or healthy weight as an adult. I remember being 205 at age 18. I remember when I was 205 I wanted to be 150, but the idea of losing 55 pounds seemed so daunting.

Unfortunately even though I'd lose some I'd always gain it back and my highest weight ever was: 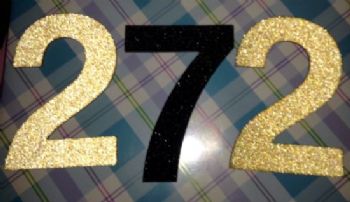 ^ I love these glitter numbers I found at Target and plan to display them in my room as a reminder never to go back there.

If I thought the idea of losing 55 pounds was daunting, I was wrong. Nothing felt worse to me than the idea of having to lose over 100 pounds. In the beginning, I simply could not wrap my mind around that fact. It just seemed too hard. So I decided that 180 would be an outstanding goal for me. I knew that I would be pretty happy at 180, and that would be enough for me. Funnily enough, I know that is why I have such mental block when I get to the bottom of the 180's. I think part of me wants to rebel and say "180 was good enough before, why do I have to go farther?" I also feel really good at 180, but I know I could feel even better at 170.

As time went on and I approached the 200 pounds mark, I decided I could probably push for 170 and get that awesome 100 pounds lost trophy. It might sound cheesy, but I long for the day that I can have that photo on my page that says I lost 100 lbs with Spark People! So 170 sounded like a great place to be, and it still does. But I would be lying if I said being in 160ville didn't intrigue me. So today I did it, I changed my ticker with my goal set at 165. The biggest reason for this being, if 165 is my goal, I can allow myself 5 pounds of wiggle room so that would be 165-170. Mentally I think that will be good for me. I don't want to be 170-175 and then feel like I am so easily able to slip back into the 180's.

So I'm going after 165. If in time I can learn to maintain 160, 155, or even 150 that would be great but I don't feel it is necessary for me to feel good. If I can learn to maintain at 165 I will be content and happy and I will go for my tummy tuck. Truth be told that tummy tuck might be able to take 5 pounds off me in skin (at least I hope so) and that would be a bonus in my eyes!

So that's it, no more worrying about it. I have decided what number I want and more importantly why I want it. The reasoning behind it makes sense to me and that is all that matters.

In other news it's a little less than 1 week until I weigh in at work for round 2 of the biggest loser. Truth be told I spent 10 days eating everything, and have just been able to undo that damage and lose about 2 more. I will know for sure on Monday, but whatever I've lost this round will be added on to the 10 I already lost for the big prize at the end. After this round is over, 1 round left, which is 3 more weeks! Truth be told, I'm fairly certain I can't beat the one girl that is doing so well and a bit smaller than me so she has a better percent (which is totally fair, I'm not complaining btw LOL), so that is kind of a mental thing for me. Realistically I don't think I can beat her, but if I can come in 2nd out of 7 people I would say that's pretty commendable! I won't win any

, but if my pants are loose and I feel good, I will consider it a win!