What I Learned From A Cheeseburger... 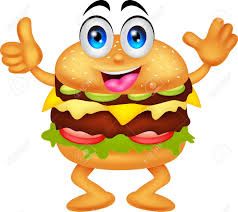 It's amazing what you can learn from something that can't even talk... or listen. Since starting the Biggest Loser at work 3 weeks ago, I have been on point. In just about 3 weeks I am down about 9 pounds... to me that's amazing because in this stage of my journey, weight loss doesn't come fast or easy. But one girl at work really ruffled my feathers.

Long story short, she was binging at work, eating so many calories (right next to me), frapps from Starbucks, sodas, burgers, fries, chips... then has the nerve to tell me all smugly, "All I am doing is indulging SLIGHTLY less, and I've already lost 6 pounds". Meanwhile, me, who was counting every calorie consistently was also down 6 pounds. It's based on percentage and she's about 50 pounds less than me, so yeah, she was going to wipe the floor with me. But here's the kicker... at home (on days off, and we have 3-4 each week), she is eating nothing other than 2 mini corndogs! How do I know? because word gets around and she admitted it to someone. Yeah, never tell your secrets at work.

Anyways, I was determined to beat her and went into beast mode, as did my good friend. We all weigh in on Monday, but she is off so she must weigh in Sundays instead. Well she's off this Sunday so had to do it today. So I had decided if she had such an incredible number that I just could not compete with I was going to have a cheeseburger, because quite frankly I had literally been making myself crazy trying to beat her, and I wanted a break.

So she comes in to get weighed, and lost a whopping 1 pound. Now don't get me wrong, I am not one to mock others, but she specifically was a big jerkface TO ME, and that is not okay. You want to be a jerkface, that's fine, because I'm going to stick it to you in the worst way.

So even with my weigh in being on Monday, I cut loose and had my cheeseburger, a patty melt to be exact. But you see the photo above? His arms out, almost like he wants to hug you? That's because he's an old friend, a friend I visited several times a week at my heaviest and even during some of my slip ups. Well what I learned from the juicy, delicious cheeseburger is...

He's not worth it!

It was good, I enjoyed EATING it, my mouth liked it, my nose liked the smell, my tastebuds and mind loved it... the rest of my body does not. My body is so unhappy and now I am unhappy.

So even if I felt I deserved it (which I have to say, I did.. and if you are going to say don't reward yourself with food, you can bite me and keep on walking LOL), I felt like it was a good mental break for me to be able to cut loose, and I don't regret it... but with that said I do not wish to have that greasy stuff any time soon. In fact I look forward getting back to my familiar, more healthy foods effective immediately. So just because I can have something and think I want it, I'm going to think long and hard next time before I make any hasty decisions.